Getting into the root of a problem quickly

The 5 Whys is a simple problem-solving technique that helps users to get to the root of the problem quickly. Made popular in the 1970s by the Toyota Production System, the 5 Whys strategy involves looking at any problem and asking: "Why?" and "What caused this problem?"
Very often, the answer to the first "why" will prompt another "why" and the answer to the second "why" will prompt another and so on; hence the name the 5 Whys strategy.

Benefits of the 5 Whys include:

When looking to solve a problem, start at the end result and work backward (toward the root cause), continually asking: "Why?" This will need to be repeated over and over until the root cause of the problem becomes apparent.

Tip:
The 5 Whys technique is a simple technique that can help you quickly get to the root of a problem. But that is all it is, and the more complex things get, the more likely it is to lead you down a false trail. If it doesn't quickly give you an answer that's obviously right, then you may need more sophisticated technique problem solving techniques like those found in our problem solving section. 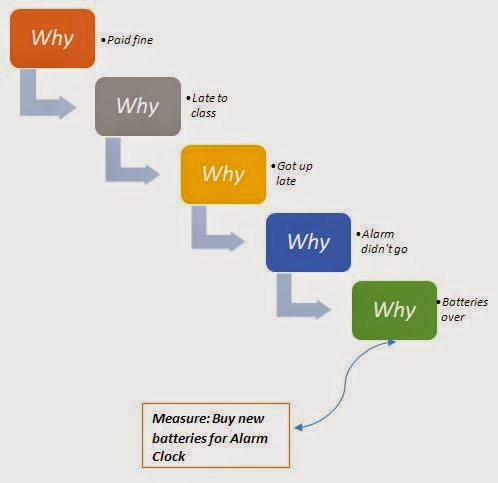 Following is an example of the 5 Whys analysis as an effective problem-solving technique:

The 5 Whys strategy is an easy and often-effective tool for uncovering the root of a problem. Because it is so elementary in nature, it can be adapted quickly and applied to most any problem. Bear in mind, however, that if it doesn't prompt an intuitive answer, other problem-solving techniques may need to be applied.
Posted by Sathish Chandramouli at 1/28/2015 12:21:00 PM